State Residents with the Best and Worst Credit Strength

*Originally published on the Instamotor Blog.

We ranked all 50 states and the District of Columbia by the credit strength of its residents considering: average credit score and credit card, auto and mortgage delinquencies. 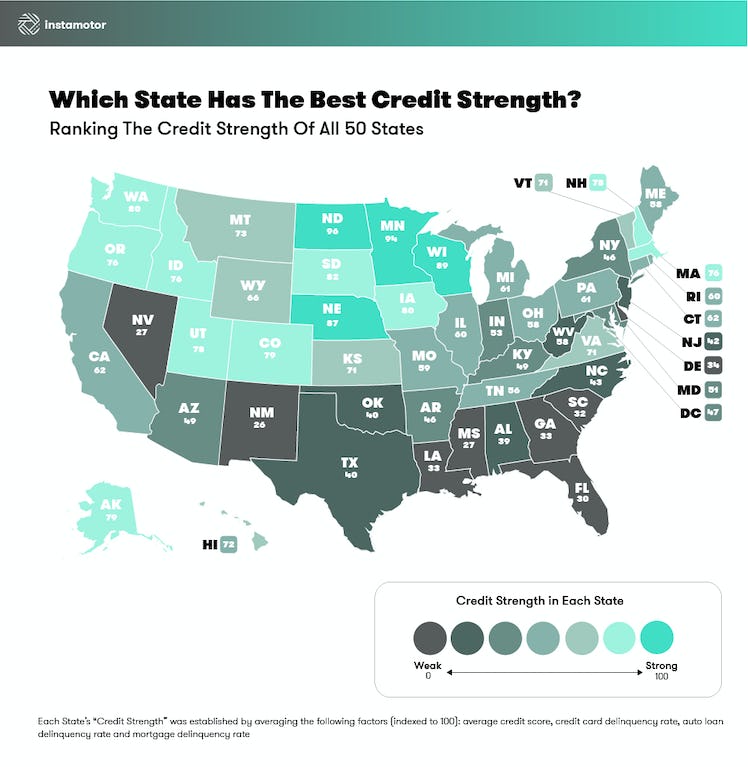 We all know that all states are not created equal, especially when it comes to factors like income, education and cost of living. While all of these factors can affect the relative credit health of residents, it’s not a direct correlation. Credit can thrive anywhere. So we looked into it.

We ranked all 50 states and the District of Columbia by the credit strength of their residents considering the following criteria: average credit score, credit card delinquencies, auto loan delinquencies and mortgage delinquencies. We analyzed all of these credit factors to give each state a score for “Credit Strength” from 0 to 100.

Here Is How The 50 States Stack Up On Credit Strength

The Midwest Tends to Have the Highest Credit Score

These states are fairly representative of their region. Southern states generally have lower credit scores while states in the Midwest tend to have the highest scores. While factors like job opportunities, cost of living and other local influences definitely affect credit-score averages, credit scores can flourish anywhere.

In case you’re wondering, and you probably are, blue states have a higher average credit score (676) than red states (667).

Nevada Has The Highest Rate of Credit Card Delinquency

In evaluating the rate of credit card delinquency (percent of credit card debt balances 90+ days past due), the state with the lowest rate is North Dakota (4.22%) and the highest is Nevada (9.88%). Thirteen states have delinquency rates higher than the national average of 7.23%.

While auto loan delinquency is generally lower than credit card delinquency, it varies a few points from state to state. The percent of delinquent (90+days past due) auto loans is lowest in Minnesota (1.72%) and highest in Washington, DC (5.97%).

Surprisingly, while D.C. has the highest rate of auto loan delinquency, they have the lowest average auto debt balance at $2,930. That’s more than $1000 less than the national average of $4,340.

North Dakota Has Consistently Has the Lowest Rate of Mortgage Delinquency

Mortgage delinquency rates are nearly back down to pre-recession rates, when the state with the highest rate of delinquency, Florida, had a rate of more than 20% in 2009 and 2010. During which time, North Dakota was the only state to have a rate less than 2%.

We analyzed data for all 50 States (and the District of Columbia) on the following four criteria, each 25% of total “Credit Strength” score: